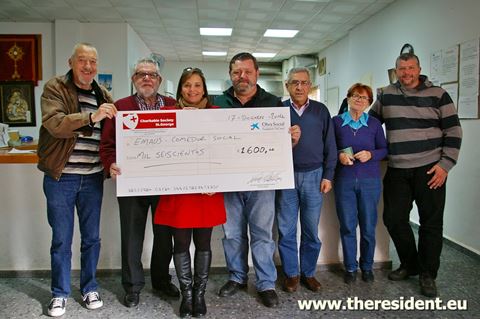 The Duquesa Charitable Society of St George met with representatives of the Emaus Foundation on Wednesday 17 December to present a cheque for 1600 euros, which will go to providing a special Christmas meal for 160 local residents who are fed by Emaus at their social kitchen in Estepona.

During the meeting the President of The Duquesa Charitable Society of St George, Dean Shelton, discussed with the General President of Comedores Sociales Emaus España, Antonio Abril de Toledo, other ways in which the St George Charity could further support the Estepona kitchen and it was agreed that it would include the 90 children on Emaus’s register in the Christmas Gift Appeal. The kitchen is always glad to receive donations of food, particularly dried chickpeas (garbanzos) and white beans (alubia blanca) and to this end the St George Charity will look to putting a collection point in our charity shop in Calle Duquesa de Arcos in Sabinillas.