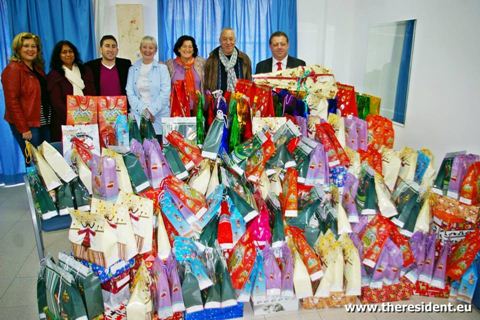 On Friday, January 3 the Duquesa Charitable Society of St. George, proudly handed over more than 300 gifts for local children in need, which the charity had been collecting since the beginning of December 2013, to open on, or, around the Three Kings. The event took place at the local Social Services Department of Manilva, headed by Councillor Paqui Lopez and the leaders of the Manilva Council, Mayoress Antonia Munoz, and  Diego Urieta, Councillor for Foreign Residents & Town Planning.

There are far too many people and local businesses to thank, or individually name, for helping us and our new Charity with this initiative.  You all know who you are and we at the charity can’t thank you enough. So, I hope you will all forgive me when I name just one, Daniela Caballero, our charity’s Treasurer.  Daniela took on this project in the only way that she seems to know how, a full on frontal assault, thrashing all our original expectations – the figure of 250 gifts, which we had set out to meet for children of both sexes between the ages of 3 and 12, to extend it up to 320 or so gifts, until we reached and covered the ages of 13 and 14 as well.

Daniela was unable to be present at the official hand over, due to her day job and work commitments in Gibraltar. As President of the Charity, I have to say that, if anybody deserves any credit for making today such a great success, it’s Daniela, for more reasons than I can begin to count.

Although we have had local Spanish support with this event, I personally believe that this particular project has given all our local foreign residents a fantastic opportunity to show our local hosts that we are an integral part of the local community, and that we care about the difficulties that so many local families are suffering due to the ongoing financial crisis primarily through a lack of work.

The Duquesa Charitable Society of St George is open to all nationalities and basically anybody who is interested in getting involved in local charitable projects in our little corner of Spain.