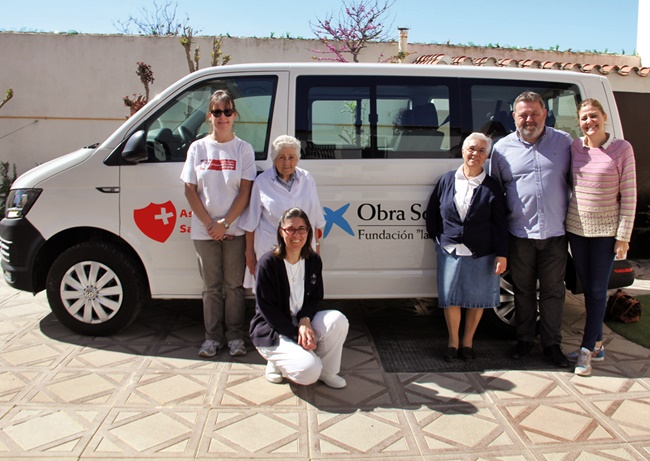 The Duquesa Charitable Society of Saint George is pleased to announce its continued support of the Hogar Marillac in La Linea with the purchase of a new minibus.

Hogar Marillac is run by the religious order Hijas de la Caridad de San Vicente de Paul (Sisters of Charity) and houses some 15 men, in their 40s and 50s, most of whom have been drug addicts and the majority suffering from HIV and AIDS and other physical and mental problems as a result of their drug use and poverty.

The residents receive treatment for their addictions and health issues as well as joining in educational classes such as reading and writing, a basic skill many of them lack, as well as basic IT, arts and crafts, etc. Without Hogar Marillac most of the men would be homeless and would probably lapse back into addiction and ill health, and the inevitable early death that goes with that way of life.

The 9-seater VW Caravelle will be ideal for the regular hospital trips as well as making it possible to take the home’s residents out for trips.

The minibus was jointly purchased by the St George Charity and La Caixa Bank’s Social Fund.

If you’d like to help the Saint George Charity continue to help others then please give generously, at either of the St George Charity shops in Sabinillas or direct into the charity’s bank account: La Caixa Bank; Name of Account Holder: Duquesa Charitable Society of St George; Account Number: 2100 2671 77 0210252624.